In 2015, the main political parties in Scotland signed up to the One in Five Charter, which asks political parties, local government and other organisations to make politics more inclusive and accessible to disabled people. The One in Five Campaign asked simply that political participation and representation reflects our society, where one in five people self-identify as having a disability or long term health condition.

At that time, Jamie Szymkowiak, One in Five’s founder said that it was important to disabled people that political meetings to be held in accessible venues, and for information – such as party manifestos – to be made available in accessible formats.

The first opportunity for the Scottish Political Parties to show their commitment to providing information in accessible formats was the 2016 Scottish Parliament Elections.

In that election campaign, all the main Scottish parties made their manifestos in large print and plain text formats. There was a mixed story for other formats, but both SNP and Scottish Labour made Easy Read, audio, British Sign Language (BSL) and Braille versions. The Scottish Conservatives made an audio version, and the Scottish Greens made audio, Braille, Easy Read.

The Electoral Commission published a report called ‘Elections for everyone’ about what people with disabilities thought about the 8th June 2017 UK Parliamentary general election.  They found that people wanted political parties to publish accessible formats of their manifestos at the same time as the main version.  That would give people with a disability as much time as everyone else to understand what the parties stand for and make a choice about who to vote for.  People said that they found it stressful to be rushed, and when information is too complicated it does not help them take in information and make decisions about who to vote for.

So, what is the situation for the 2021 Scottish Parliament Election?

Disability Equality Scotland has launched a Manifesto tracker to highlight what political parties are pledging for disabled people and the range of accessible formats that their manifestos are available in. 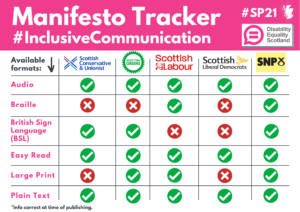 Disability Equality Scotland will continue to update the tracker when the formats become available.